Riythvika is among the most promising Tamil speaking young heroines around. With back to back impressive performances in films like Madras and Oru Naal Koothu, Riythvika has biggies like Kabali and Iru Mugan up next. In this chat with Kaushik LM for Only Kollywood, the young actress starts off with Oru Naal Koothu and opens up on her other projects,“Oru Naal Koothu has gotten me good feedback. I had no apprehensions or hesitation in accepting the role even though it had a bold streak. Director Nelson wanted a Tamil speaking girl for the RJ role and I was his one and only option as he had seen Madras and really liked my performance in it.”Ask her if she felt uncomfortable doing an intimate scene in the film, she retorts, “There was nothing vulgar or unpleasant about the scene and I wasn’t required to be in any comfort zone to enact it. It was a tastefully done scene.”With all the negative role buzz surrounding her character in Kabali, Riythvika was naturally guarded and didn’t reveal much,“It is a good role and I just can’t reveal more. I had to give auditions for the role in Madras but I was directly selected for Kabali. Ranjith sir gives lot of space and freedom to his actors. From Madras, his level has increased obviously. That’s how he got the opportunity to work with Rajini sir so soon.If Rajini sir likes a scene, he will appreciate at once. Even the next day, he’ll mention about it. I have a few combination scenes with him and he liked my performance.“What’s her favorite song in Kabali and will she be a part in any of them?“Maya Nadhi is my favorite track. All the songs have been shot as montages I think, and I have to see the film to find out in which song I am a part of.”Up next is Irumugan, another much expected biggie …“In Irumugan, I have a very small role in combination with Vikram sir and Nithya Menen. Director Anand Shankar was confident of the role’s impact and I accepted it right away as I wanted to work with Vikram sir. The shoot and dubbing are done. I shot in Malaysia again, after Kabali. I have some connect with this country (laughs).”So, is Riythvika happy with the slow and steady pace at which her career is progressing?“I am happy with the character roles that I am getting. They have good acting scope and importance. Be it Paradesi, Madras, Oru Naal Koothu or Kabali next, they have all worked out well. I wish to be recognized as the best artiste, and I am not after glamour roles. That’s why I am choosy with my picks.”The contemporary who has really impressed her? “I admire Aishwarya Rajesh as she has proven that she can do all kinds of roles, be it character-oriented or as the lead heroine. And she speaks Tamil, importantly.”Riythvika also has Goundamani’s Engalukku Veru Kilaigal Kidaiyadhu and Sigai ready for release. She expects Kabali to open the floodgates for her. Best wishes !!! 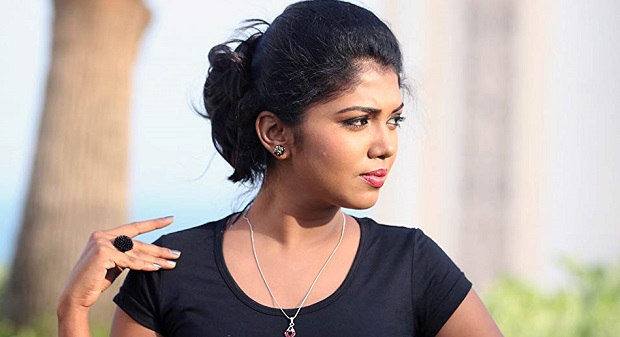