Lavanya Tripathi is getting good reviews for her performance and glamour factor in the just-released Telugu romance drama Srirasthu Subhamastu, co-starring Allu Sirish. She will also be seen soon in Tamil in Maayavan, directed by CV Kumar. In this interview for Only Kollywood, Lavanya opens up to Kaushik LM.You have a lot of Hits already in Telugu, despite doing limited films. How do you choose so wisely? “I go with my gut feeling. The script and my character are prime, followed by the director and the hero finally.”Almost all your Telugu roles seem to fall in the homely, ‘girl next door’ space …“My first film slotted me in this homely space. But I don’t want to be stuck in this space, I am actually not happy doing that. I want to experiment more. In real life, I am totally different from what I am on screen. I want such real roles. But even in the girl next door space, I have been doing different roles in the way the character behaves and acts. There are minor variations and even slight risks along the way like when I chose to play a married woman in Soggade Chinni Nayana. In Lacchimdeviki O Lekkundi, I got to play 3 different shades of roles and I really enjoyed doing it. Though the film was an average performer, I got a lot of appreciation. A famous director complimented me for this film particularly, and I felt happy.” How does Srirasthu Subhamastu stand out from your earlier roles?“Every director comes with a new character and he brings a new essence to it. It is not a regular role and felt different for me. Though she will be the ‘girl next door’, the body language is different from my previous films.”You are returning to Tamil cinema with Maayavan. More on your role? “I am playing a psychiatrist in Maayavan. I was skeptical if I could manage between Tamil and Telugu but I was impressed with the script narration over a call. It is not the regular girl’s role and there is something concrete for me. It is my fastest movie and I didn’t even realize that it was wrapped. There were multiple cameras capturing the action. CV Kumar was so confident, and it was surprising to see. He didn’t seem like a first-time director on the sets. He was clear in what he wanted and extracted work from the actors. There are no song – dance routines, no romance and other unnecessary elements. It is a balanced film in the sci-fi space.”Your comfort levels with the Telugu and Tamil language? Ideas on dubbing soon?“Both industries feel the same to me and there are nice people in both industries, but I feel more at home in Telugu. I will try dubbing in Telugu first. Tamil ‘konjam kashtam’ and I am also not getting too many films in Tamil. There is not much time to try dubbing in Tamil.”

Lavanya has a couple of Telugu films next, Mister and one with Sharvanand. She maintains that the script will always be the key for her. Good luck Lavanya!

Deekay opens up about Kavalai Vendam 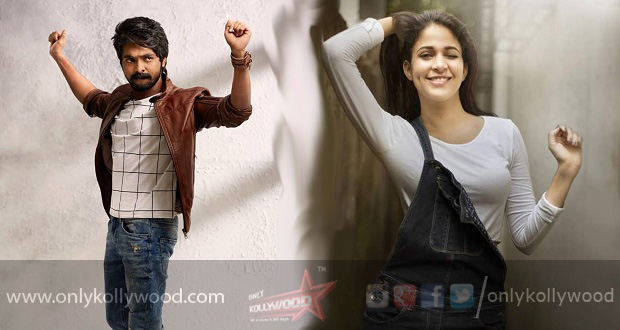 GV Prakash – Lavanya Tripathi to head to London for “100% Kadhal”