A little gem that will put a smile on your face.

Tamil cinema is known for producing some little gems that come out of the blue and surprise us with their innocence and beauty. While a lot of films have done it in the past, this year it is none other than Madhumita’s KD (a) Karuppu Durai, a film which smacks in a bittersweet tale of emotions, life and relationships. At just two hours, KD brings us a lot of lovely, memorable moments that will put a smile on your face too, for sure.

Madhumita sets the film rolling on two characters. The first is the titular character in Karuppu Durai (Mu. Ramasamy), a man in his 80s who wakes up from a coma, only to the news of his own family members planning to mercy kill him. Overhearing the news, he flees from his home, only to meet the second important character in Kutty (Naga Vishal), an orphan who has been raised by a priest. The two men’s lives cross paths to generous laughter, lot of moments which make you think and the idea of loving people, wherever they come from.

The film’s main strength lies in the two central characters and how they have been set up – KD is a man with great values, wanting to strike off all the lines from his bucket list, while Kutty is a happy-go-lucky youngster who wishes to enjoy life to the fullest. The juxtaposition of the traits which these two men bring help us gel with the film and relate to the incidents onscreen, making it a rewarding experience overall.

Madhumita makes sure that there isn’t any kind of pomp and show with respect to the visuals and the music, as they maintain a simplistic tempo throughout. This augurs well for the end result of the film, giving it what it needs.

In totality, KD is a wonderful feel-good drama that has been made with all heart and no fakeness. KD (a) Karuppu Durai Movie Review by Only Kollywood 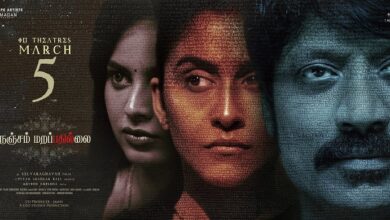