Shruti Haasan will play the female lead. Interestingly, this is the first time that Shruti Haasan will be pairing up with Vijay Sethupathi for a film. The film will also feature well-known actor Jagapathi Babu in a prominent role. National Award winning director S P Jananathan, who is known for making good entertaining films that also seek to highlight political and social justice issues like Peraanmai, Ee and Purampokku, will be directing Laabam.

Work on the first schedule of this big budget film got underway on Monday with a pooja at Rajapalayam. Sources close to the unit of the film vouch that the action entertainer with a solid storyline will be an important film in the careers of both Vijay Sethupathi and Shruti Haasan.

Imman composes the music for the project and Ramji has been roped in to crank the camera.

Nayanthara joins the sets of Superstar Rajinikanth's Darbar in Mumbai 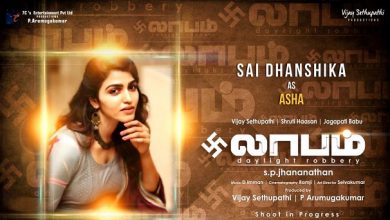