With The Lion King scheduled for worldwide release on July 19, Arvind Swami, Siddharth, Robo Shankar and Singam Puli who have dubbed for the Tamil version were present for the pre-release event in Chennai.

Actor Arvind Swami said, “Before 25 years, I dubbed for Simba’s character and was completely imbibed to a new experience. Now, I am so glad to be dubbing for ‘Scar’ character and it’s really a great interesting character as it sticks to lots of diversified shades.” When asked why he has been recently involved in the characters with negative shades, he reverted, “It’s been a stereotyped role with hero characters and I felt that the negative character has more to unleash with shades.”

Actor Siddarth said, “The Lion King isn’t a movie meant for kids. It’s for everyone as it owns the elements of ‘Love and Care’. This movie is the best example of the concept of having a simple theme and turning into a special one for universal audiences. For an actor like me, who is bored dubbing looking at my face in all movies; this one is a completely new experience. What “The Lion King” actually delivers as a message is “Life is a circle”…. I was awestruck watching the stage performance of ‘Lion King’ in the USA. They have now made it with a bigger version with unbelievable technical wizardry.” 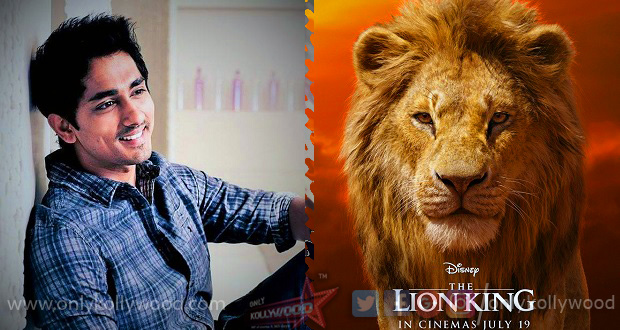