Speaking at the success meet of Kadaikutty Singam and about the team’s decision to donate Rs 1 crore to farmers, Suriya, film’s producer said, “Ella Pugazhum Iyakkunarukke’. If not for Pandiraj sir, this film would not have been so successful. It’s been a long time for me to see a stage written with blockbuster posters. The film has proved that cinema is a good medium, where good things have happened through messages conveyed. In Tamil Nadu, it’s easy to bring up Best 5 engineers and doctors, but not many of us know about the farmers. So we decided to honor them here on this occasion. The film is successful because of the love and trust that everyone on the team had for each other. I thank Rajshekar Pandian, who had carried the entire project on his shoulders. It’s farmers who are sweating more than actors. So we wanted to donate this 1Crore amount for the agricultural welfare.”

Karthi – “There are few misinterpretations that good movies don’t run. That’s wrong! You make a good film and it will definitely run. I am so happy that theatres are having the fragrance of Jasmine flowers and babies with feeding bottles. This has been great news to us.”

He furthermore added something revolutionary with STOP moment

S – Sugar –Avoid white sugar as it has sulphur blended to it and around 2000lts of water is wasted for the sake of one handful of sugar.

O – Oil. Go for the oil that is produced from the edible products.

This is the request made by farmers and I’m sure that this will be a greater means of service to the society.”

Director Pandiraj – “During the beginning of the film’s process, I had doubted whether Karthi sir would befittingly look perfect for my pattern of work. The things were the same when it came to the close associates of Karthi. I don’t know who propelled up such rumors that I would be too arrogant with actors. But by end of the process, both of us have found the greatest success together.”

Sayyeshaa – “Yesterday, I saw someone coming up to me and saying that his wife is pregnant and if a girl child is born, he would name her after my character’s name in Kadaikutty Singam. Such is the beautiful result that the film has witnessed.” 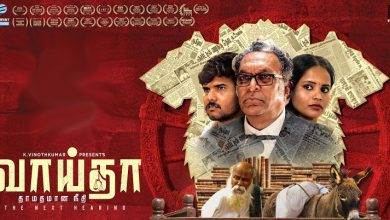