Inga Enna Sollduhu fails to say the complete details in narration which also resulted in hiding the technical brilliance.

Quite and bold experiment yet again in Tamil Cinema, VTV Ganesh who is well known for grumpy voice with unique style in his dialouge delivery has taken a change in promoting himself as the hero of Inga Enna Solludhu. Meera jasmine portrays herself as Raji who is very lonely in character,its also a good comeback where she scores with her experience and her homely looks. STR peeks in with Ganesh to engage Meera and to eradicate loneliness, they gather being friends. Ganesh develops a soft corner for Meera which virtually turns it to love and gets married. What happens in their married life is the rest.

Ganesh travels to Chennai from Kotagiri cancelling his holiday hearing the news of his wife’s accident. Uncomfortable in timings he is forced to take a cab. To engage the travel stress Ganesh takes the chance of narrating his life path to Santhanam the cab driver then he starts briefing on his friends, business, romance and personality. Ganesh with Santhanam, certainly a good combo they also give the chance for giggles at time but continuous dialogues makes it little uncomfortable.

STR comes in a for cameo with Andrea and brightens the screenplay but  the rest of them making a poor performance, illogical and less weight-age to the show spoils the lot.  Meera Jasmine and STR enters only 15 min before the first half  and engages completely with Ganesh and their performance along with Santhanam’s timely dialogues was the highlight. The second half is family oriented and  its valued sentiments  which has nothing much to impress in the screenplay with its same old and easy, not new to Tamil cinema and drags the audience forcibly to the climax.

STR’s charm, cool and casual looks, Dharaun kumar’s BGM and camera works by Rajaseker are the major plus and Santhanam also enjoys the partly success of the play. The movie is technically well crewed but lagging with the screen presence allows  the audience to stay uncomfortable. 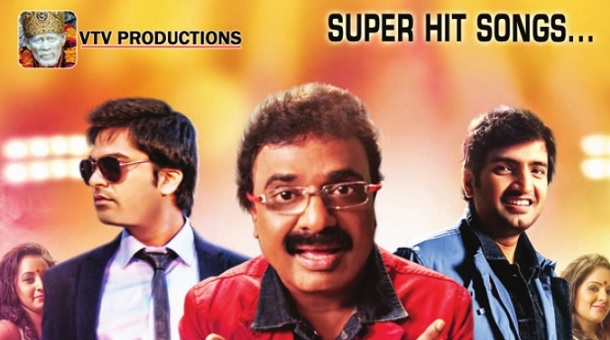