Days before the release of his debut outing Annabelle Sethupathi, the film’s director Deepak Sundarrajan spoke at the film’s press meet, expressing his experience on the film’s journey so far.

“Producer is the sole reason for the grandeur in this movie. I thank Vijay Sethupathi, Taapsee Pannu, Radhika Madam and all the other actors for banking their trust on me and acting in this movie. This is not a horror movie, but a fantasy-comedy, which will be liked by all. I request you to support this movie. I have learnt a lot of humanity from my father, but inherited the directorial lessons from my mentor AL Vijay sir. I have no intention to continue to making comedy movies, but am looking forward to work in different genres. I have no desire to appear before camera as an actor, and my core concentration is direction,” said the director.

The film stars Vijay Sethupathi, Taapsee, Radhika and others. It is arriving to Disney+Hotstar on the 17th of September.

Murungakkai Chips: Shanthnu talks about how the film is special to him

SRK’s next with Atlee titled Lion? 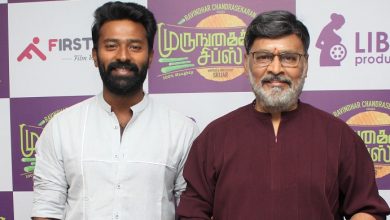 Murungakkai Chips: Shanthnu talks about how the film is special to him